21:13 Jesus then came and took the bread and gave it to them, and likewise the fish. 14 This is now the third time Jesus showed Himself to His disciples after He was raised from the dead.

Three strikes and you're out. Third time is a charm. If at first you don't succeed, try, try again. Everything happens in threes.

That's just a quick sampling of some of the common sayings we have around the number three. It turns out the number 3 pops up a lot in the Bible as well. Actually a lot is an understatement - it's hundreds of times.

Jesus was tempted 3 times. He predicted His death and resurrection 3 different times. He prayed in the garden three times. He was questioned by the authorities three times (The High Priest, Pilate and Herod). He was put on the cross at the 3rd hour, darkness came over the land for 3 hours and He was "in the heart of the earth" for three days and three nights just as Jonah had been in the fish for 3 days and 3 nights.

Now He is risen and this morning meal on the beach is the third time He has visited the disciples and John specifically points it out. Why? 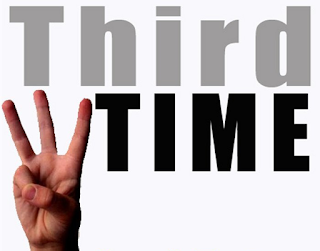 Like yesterday I have a theory. You can do what you wish with it. I am certainly not saying "this is definitely the answer".

Abraham built three altars that we are told about spread over decades of time. Each time he had an encounter with God but it was at the third altar and after the third encounter that God said "Now I know that you trust Me."

Moses met God at a burning bush that wasn't actually being burned and God asked him to return to Egypt to lead His people out of bondage. Three times Moses resisted with excuses. Three miraculous signs were given Moses to show him God would be with him. It was after the third sign that Moses consented to go.

It was after the third temptation that Satan left Jesus alone.

There is something about the third time that breaks down resistance, or establishes resistance, or effects a change. Why that is I am not sure but it is a definite pattern in Scripture and we have adopted it into our culture. "I'll give you three tries." "You have three guesses." "I'm going to give him the 3rd degree"

Here is my practical take away from all this. When facing a challenge or dealing with another person over a difficult matter or trying to establish truth in a situation I will use the pattern of three. Three tries, three visits, three attempts to verify the truth.

One thing I have learned is that I don't need to fully understand something in order to use it. If God says the third time is often the clincher then so be it. After three strikes it seems we're either all in or all out. Tomorrow we'll see what effect Jesus' third visit had and discover another set of threes along the way.
Posted by Pastor Dan at 08:59