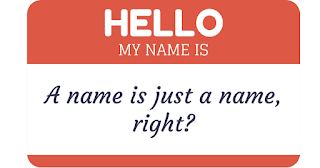 If you have never studied the use of names in the Bible you are missing out. Many of the prominent characters went through a name change. Their parents gave them one name and God gave them a new one. In our culture we mostly name our children based on how a name sounds to us. However in many cultures still today and through much of the various Biblical eras names were chosen for their meaning.

For example Elijah means "Yahweh is my God." His successor was Elisha which means "God is my salvation".

Jacob was born clinging to the heel of his twin brother and his parents named him "usurper" which is what Jacob means. Later God changed his name to Israel which means "God wrestled" and in the context God told Jacob "I am changing your name to Israel because you have wrestled with Me and overcome."

What did Jacob overcome? His flawed character as an underhanded usurper and the mountain of guilt that had piled up as a result.

In the simplest of terms 'name' is a reference to character and when God transforms our character He changes our name to reflect it. In fact the book of Revelation says we're all getting a new name.

Now back to Simon Peter. When they met Peter's name was Simon. Simon is a fascinating name. In Hebrew it means "to hear or he has heard" and in Greek it means "snub nosed". Peter means "rock or stone"

As in the conversation between Peter and Jesus we are reading today both names are used often and almost interchangeably with him unless you are really paying attention. You see Simon is the man Jesus met. Simon is the character of the man before Jesus entered his life. Peter is the man Jesus intended for Simon to become. Before meeting Jesus Simon was quick to hear and quick to react. We have an expression in English "can't see past the end of his own nose." Simon (snub or short nose) yet still couldn't see past it. If anyone was going to argue with Jesus it was Simon Peter. He heard everything Jesus said but could only see his own perspective on it. This made him volatile and unstable, always acting first and thinking later. Jesus changed his name to Peter: rock - stable - steady - firm.

Changing a name is quick and relatively simple. Changing a character is not.

When Simon heard Jesus say "you will betray Me" he couldn't see past his snub nose. All he saw in the mirror was strength and loyalty and rugged determination. In his own mind he was a rock yet when Jesus needed him to be a rock he rolled away. See who we think we are and who we really are, they often don't match.

Jesus turned to him and said "Simon (always hearing but never seeing the truth) do you love me more than these?"

Did you catch that? Jesus didn't just question the quality of his love but questioned it in contrast to the other disciples. Why? Because Simon Peter had claimed his was superior.

Jesus is painfully tearing off the blinders. Simon can hear but he can't see past his own nose and worse than that what he thinks he sees is entirely inaccurate. Essentially Simon is somewhere in between blind and delusional. Simon thinks he is a rock but Jesus knows He needs The Rock.

Jesus keeps addressing Simon and Peter keeps answering. Is that confusing? It kind of is but you will notice that the answers indicate Simon Peter is not just hearing what Jesus is saying but is starting to see past the end of his own nose. Prior to the ordeal at the cross Simon Peter would have insisted in the most forceful terms that his love for Jesus was agape love - the deepest truest most loyal love. Now he acknowledges that is not the case. Now he is seeing past his own nose and relying on the superior wisdom and knowledge of The Rock. "Lord You know all things..."

Simon is who he was when he met Jesus. Peter is who he is becoming, a man that knows Who the real Rock is.

For now he is Simon Peter - a man in transition, a man undergoing transformation - a work in progress.

The best part? The Rock has remained unmoved through the entire turbulent ordeal. He is the Potter and we are the clay and our Rock is a Potter that never quits.
Posted by Pastor Dan at 23:10