My dad says a person with a chip on their shoulder is a sign of wood higher up. I must have a head full of wood because I have a huge chip on my shoulder. Why? Because after nearly two decades of pastoring and four decades of life I have seen over and over again that too many of us get our best exercise from jumping to conclusions. John reveals that this is not a new phenomenon. 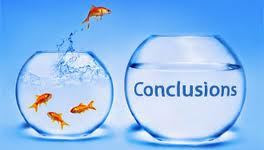 I have to admit I am literally amazed sometimes by how tiny a piece of information people need to come up with the most detailed and elaborate stories. It started for me when I was in grade six. On a Sunday afternoon my friend and I built a zip line from the roof of his 2 storey garage down to the deck on the back of his house. We made several exhilarating trips before disaster struck. I jumped off the roof ready to zip down to the deck when the harness snapped and I went crashing to the ground about 20 feet below. I can still see the cloudy sky above me as I lay on the ground with the wind knocked out of me struggling to breathe.

My parents came and got me and took me to the hospital. They kept me overnight for observation and released me in the morning. Not a scratch to show for my adventure. When I got to school on Monday afternoon the rumor was that I was in a full body cast.

Twelve years ago a tumor was discovered in my bladder. Long story but God healed me in such a way that my surgeon just shook his head and said it was clearly a miracle. Shortly after the diagnosis I heard from a church member that they heard I had a brain tumor and only months to live.

Those rumors were silly and thankfully harmless but many are not. We hear a juicy piece of info or see two people talking or whatever else might be the trigger and we create a scenario and then share it as if it is truth. The next person refines or adds to the story and before long a single piece of information taken out of context or interpreted to be more than it was becomes a runaway snow ball.
The point Jesus was making to Peter had nothing to do with how long John was going to live. The point was that John's life had zero to do with Peter's task which was to follow Jesus.

Gossiping is not limited to a certain class, age group, or gender either. You will note that only grown men in leadership were privy to what Jesus said that day on the beach. The source of the ridiculous rumour that John would never die was them. 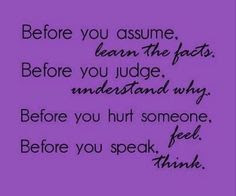 The chip on my shoulder is this: If you didn't see Johnny and Susie in the baby maker position why are you telling Tim that they were? If you didn't hear Ben telling Joe that he killed his wife and her body is buried under the barn floor why are you helping spread the rumour? In fact even if you did see or hear anything of the sort why are you telling people who can't do anything about it and never needed to know in the first place? If a significant portion of your sentences begin with "Did you hear...?" you need to get on your knees and pray for a new vocabulary and some divine discernment. If you think you know about a crime speak to law enforcement. If you heard a rumour about Susie and Johnny then speak to them or speak to no one. Better yet tell the person who told you that you don't want to hear things like that.

Say about others only what you would want others to say about you...

1 Timothy 5
13 And besides they learn to be idle, wandering about from house to house, and not only idle but also gossips and busybodies, saying things which they ought not.


And a whisperer separates the best of friends.
Posted by Pastor Dan at 22:19