1:13 And when they had entered, they went up into the upper room where they were staying: Peter, James, John, and Andrew; Philip and Thomas; Bartholomew and Matthew; James the son of Alphaeus and Simon the Zealot; and Judas the son of James. 14 These all continued with one accord in prayer and supplication, with the women and Mary the mother of Jesus, and with His brothers.

Much ink has been spilled on the role of women in the Bible. Often that role is one of subservience. Too often they were not far above cattle. Many try to pin the blame on God. They also try to nail Him with supporting slavery and host of other knuckle dragging behaviours. However the behaviours of men (like polygamy) are just that. When God does get involved in our mess, it is not to endorse our foolishness or cruelty, or gender bias but to clean things up. Did God give guidelines to Moses regarding slavery that made it appear like He was in favour of slavery? Yes He did. But what He was actually doing was improving the conditions of those who were already slaves. Why didn't He just ban slavery? Because God is not a dictator and He changes things as we are open to that change. That's why in the Old Testament He tried to clean up the cycle of escalating revenge and violence with a simple rule: an eye for an eye and a tooth for a tooth. Then Jesus came and said "That's what you have been told but I say if a man strikes you on one cheek turn to him the other cheek also." The rules appeared to change but the underlying intent and character of the law did not - dial down violence and ratchet up mercy because "a soft answer turns away wrath."

Where am I going with all this? 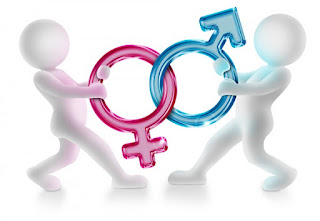 Acts 1 tells us that when Jesus left the disciples returned to the upper room in Jerusalem where they had been staying but they were alone. Notice the order in which the group was described:

Not the order you would expect to find. In fact often in the Old Testament no women would be mentioned no matter how many there were. This recognition of the female followers of Jesus introduced before His own mother and brothers is astounding and should not be quickly dismissed or passed by. Jesus by the way He treated women has initiated an explosion toward gender equality. Unfortunately many supposed Christians are still dragging their knuckles on this (and many other issues) today. The SAME Jesus who appeared to Mary Magdalene before appearing to any male figure is the SAME Jesus who is returning in the clouds to inaugurate the Kingdom of perfect justice, mercy, and equality.

Our knuckle dragging continues but when we follow Jesus enlightenment comes. Either that or we're not really following...
Posted by Pastor Dan at 10:29