2:1 When the Day of Pentecost had fully come, they were all with one accord in one place. 2 And suddenly there came a sound from heaven, as of a rushing mighty wind, and it filled the whole house where they were sitting. 3 Then there appeared to them divided tongues, as of fire, and one sat upon each of them. 4 And they were all filled with the Holy Spirit and began to speak with other tongues, as the Spirit gave them utterance.

Pentecost was a harvest festival. The feast of the first fruits. It was when the first ripe produce was taken from the fields and offered to God symbolizing that all the harvest bounty came from Him.

Multiple things are converging on this particular day. The 120 people in that room represent the first fruits of those trained and ready to make Jesus known to the world as the Lamb of God that takes away their sin. It will also be the first day that thousands understand and join them in following Jesus. Another first fruits harvest. 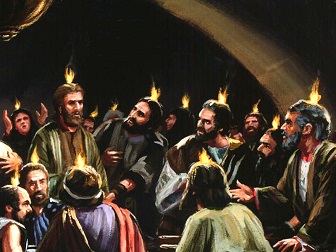 The day begins with God pouring out His Spirit on those 120 in a way He has never done before. Another first. The dramatic events of roaring wind and tongues of fire serve not only the purpose of impressing on the 120 that God is at work, but it also draws a crowd wanting to know what is happening.

Jerusalem is full of people from all over who have come to celebrate. Because of the international and multicultural circumstances God equips His first fruit missionaries with exactly what they will need. The tongues of fire on their heads becomes languages in their mouths so that they can speak to the various peoples in their own language. Nothing is accidental, random, coincidence, or left to chance with our God. In one moment he reversed the curse of the tower of Babel and miraculously tore down the language barrier.

In 1994 I had the privilege of going to the Ukraine to teach English and help share Jesus just 5 years after communism fell. Language was a barrier. We had to have translators. It was amazing to me to discover that two of our translators knew no English only one month before we arrived. Translating a speaker as they preach is really tough even if you know both languages well. For a person who never knew one of the languages a month previous it is impossible. However nothing is impossible with God.

He had prepared people to speak for Him and people to listen. His Spirit bridged the gap by an instantaneous gift of languages. He did it on the day of Pentecost and He is still doing it today. Pretty simple for a God who walks on water, walks through walls, and travels through space without a ship or even a suit.

The only limitation He has is our will. He is love and love never forces. He will speak our language but He won't force us to hear or follow. This truth makes me love Him even more - He is strong enough to run the entire universe but gentle enough to let me choose. Why wouldn't we choose Him?
Posted by Pastor Dan at 09:40