2:7 Then they were all amazed and marveled, saying to one another, “Look, are not all these who speak Galileans? 8 And how is it that we hear, each in our own language in which we were born? 9 Parthians and Medes and Elamites, those dwelling in Mesopotamia, Judea and Cappadocia, Pontus and Asia, 10 Phrygia and Pamphylia, Egypt and the parts of Libya adjoining Cyrene, visitors from Rome, both Jews and proselytes, 11 Cretans and Arabs—we hear them speaking in our own tongues the wonderful works of God.” 12 So they were all amazed and perplexed, saying to one another, “Whatever could this mean?”

What does this mean? 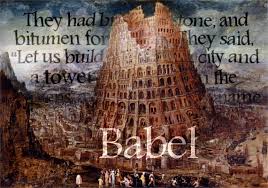 The Bible says all of humanity originally spoke one language. Unfortunately the blessing became a curse when the whole world united in rebellion against God. In mercy God did the opposite of what happened here on the day of Pentecost. Suddenly as they were all working together but against God they could no longer communicate. Words became just confusing and meaningless sounds. In an instant the world was divided by the barrier of languages.

I said the world was united against God but really they were united against themselves. Every instruction from God is for our good and any rebellion against them is ultimately self-destructive. In live and mercy God intervened to prevent complete and utter self-destruction on a global scale. By the barrier created by languages the rapid advance of rebellion made possible through a united effort came to a grinding halt. For centuries and millenia afterwards the world became increasingly divided as languages for new people groups.

On the day of Pentecost for the first time since the Tower of Babel a glimpse was given into a world without the barrier of languages. For one glorious day God reversed the curse so that these devout worshippers from all over the world could simultaneously hear the Story.

What does it mean?

It means God is not limited by our limitations. It means God sees no borders and favour no people group above another. It means God has ways of accomplishing His purposes that we can't even imagine. It means God knows our language. It means the Story can't be stopped no matter how faint the pulse of Christianity may seem right now. God will thwart evil self-destructive schemes when necessary and reverse the curse when it makes sharing the Story possible.

Another horrific terror attack in Belgium this morning. The world is getting darker but it's the darkest just before dawn. You can't stop the dawn. Love Wins.
Posted by Pastor Dan at 08:43