2:22 “Men of Israel, hear these words: Jesus of Nazareth, a Man attested by God to you by miracles, wonders, and signs which God did through Him in your midst, as you yourselves also know— 23 Him, being delivered by the determined purpose and foreknowledge of God, you have taken by lawless hands, have crucified, and put to death; 24 whom God raised up, having loosed the pains of death, because it was not possible that He should be held by it."

Watch this and then meet me back here. 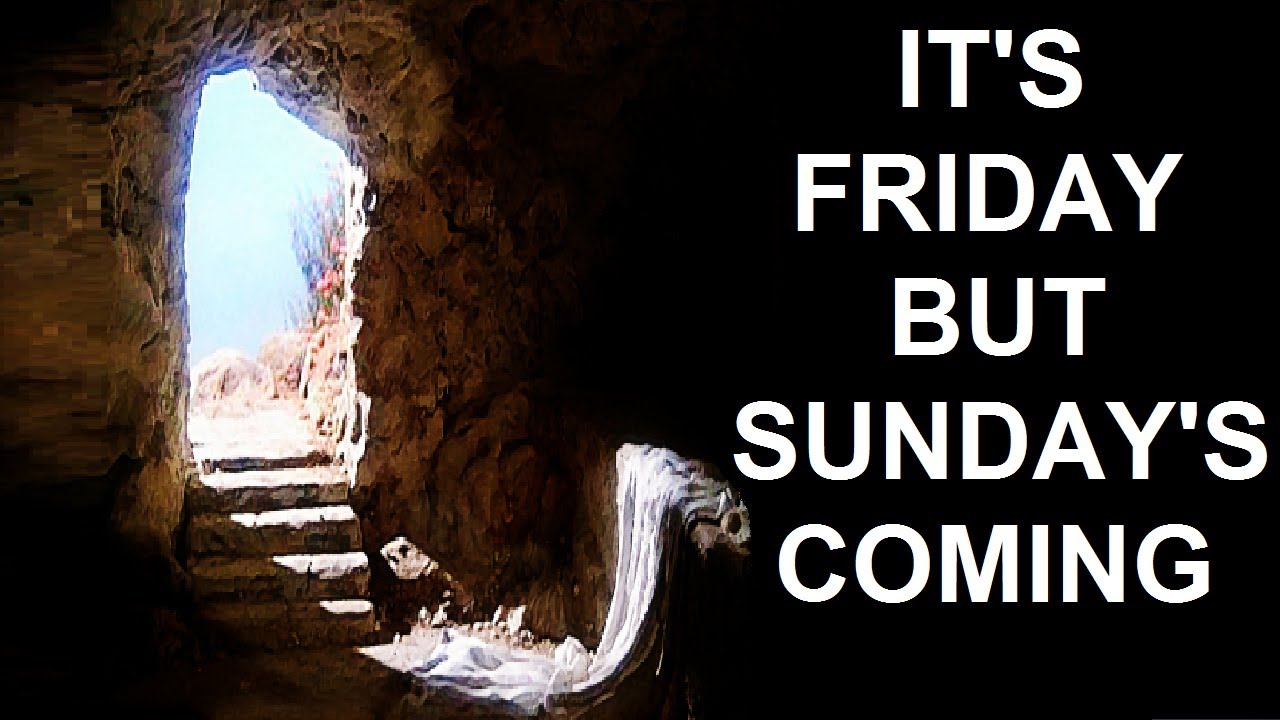 Powerful isn't it? Yet from the first time I saw it, something was off and I couldn't figure out why. The unknown preacher is using the death of Jesus and His eventual resurrection as an analogy for a much broader sweep of time. Friday represents everything Jesus did on our behalf and everything we did to Him. Sunday represents a new beginning. Just as all creation began on the first day, so will His return usher in a new beginning. Indeed Sunday is coming.

Then I figured it out. A day was missing. Saturday/Sabbath. Picture the scene. The mock trials on Friday, the beatings, the march to Calvary when Jesus collapsed under the weight of the cross and our sins. The darkness at noon on Friday, the heart piercing declaration of our emancipation "It Is Finished!", the earthquake that left no doubt something far beyond the normal had just occurred. Friday was intense. The supernatural was undeniable. The intensity was palpable.

And then it was over.

It all just ended.

The sun which reappeared at 3 pm set on the tomb of the now buried Messiah. It was all over. The earth was eerily quiet. The followers of Jesus were scattered and devastated. His enemies were satisfied yet uneasy. Could it be that easy? Was it really over? Was He really gone?

The quiet persisted all the next day. As much as the supernatural put on an undeniable display the day before, Sabbath was the opposite. The heavens were silent. The earth was still. There was no sign of Jesus or the undeniable power of God anywhere. It seemed to be over forever...

You see it isn't Friday. It isn't Sunday either. It's Sabbath. It seems often that God is truly resting. Some are even so bold and defiant as to claim God is dead or that He never existed. Even MacLean's magazine this week on the front cover is asking "Did Jesus really exist?"

No one asked that on Friday but on Sabbath it began to feel like His life had just been a dream for some and a nightmare for others.

Here's what the disciple wrote a few years after that dark Friday followed by a silent Sabbath:

2 Peter 3:4 First off, you need to know that in the last days, mockers are going to have a heyday. Reducing everything to the level of their puny feelings, they’ll mock, “So what’s happened to the promise of his Coming? Our ancestors are dead and buried, and everything’s going on just as it has from the first day of creation. Nothing’s changed.”

Way back in Genesis God promised His Seed would come. 4000 years later He came. Over 700 years before His arrival Isaiah wrote in detail about His suffering and death as the Lamb of God.

It's been almost 2000 years since that undeniably supernatural Friday. The silence since has been long. Will "Sunday" ever come? You better believe it!

2 Peter 3:8-9 Don’t overlook the obvious here, friends. With God, one day is as good as a thousand years, a thousand years as a day. God isn’t late with his promise as some measure lateness. He is restraining himself on account of you, holding back the End because he doesn’t want anyone lost. He’s giving everyone space and time to change.

Today if you hear His voice don't harden heart. Instead grab on to His mercy and His promises. Sunday is coming...
Posted by Pastor Dan at 22:44