1:4 And being assembled together with them, He commanded them not to depart from Jerusalem, but to wait for the Promise of the Father, “which,” He said, “you have heard from Me; 5 for John truly baptized with water, but you shall be baptized with the Holy Spirit not many days from now.”

The word translated "commanded" here is an interesting one. Some English translations render it "instructed" or some similar word. However the English could never convey the fact that it's a term associated with the military. When Jesus rose from the dead He was the same but His and our status has changed. In Matthew 28 He tells His followers "All authority has been given me in heaven and earth. Go therefore and..."

Jesus is now King of kings and Lord of lords. Even though He is love and His every move and decision is motivated by love, He is our Commander and we take our orders from Him. As Paul says later "We are not our own for we were bought with a price". This idea in our culture that my body is my own and my decisions are my own and I belong to no one is a lie. Sure it's true that God has given us the freedom to behave that way and He would never take it away. However that doesn't make the concept true. 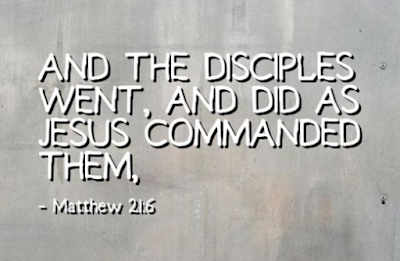 What am I saying? If we profess to be His followers we ought to take our orders from Him. No one in the military says or thinks he/she has the right to interpret orders from their commanding officers as suggestions. There are only two choices. Either obey the command or leave the military.

I wonder what would happen in the Christian church today if we treated our Commanding Officer with that level of respect. What would happen if we either took Him at His Word or "left the military"?

You have to remember that His command to remain in Jerusalem was no minor inconvenience. Jerusalem was the hotbed of hatred toward Jesus and His followers. Their chances humanly speaking of remaining safe and hidden were the most bleak in Jerusalem. It was the last place they would choose to stay.

Here's the truth: If we only follow His commands when they are easy or convenient or comfortable we aren't following Him at all. Sometimes in the military you get called to the front lines where the fighting is most severe. When the call comes you go.

"Wait in Jerusalem for the promise... that's an order."

What about you? Where does God want you right now? If you aren't there why aren't you? "Today if you hear His voice do not harden your heart..."
Posted by Pastor Dan at 08:19