3:1 "Now Peter and John went up together to the temple at the hour of prayer, the ninth hour. 2 And a certain man lame from his mother’s womb was carried, whom they laid daily at the gate of the temple which is called Beautiful, to ask alms from those who entered the temple; 3 who, seeing Peter and John about to go into the temple, asked for alms. 4 And fixing his eyes on him, with John, Peter said, “Look at us.” 5 So he gave them his attention, expecting to receive something from them. 6 Then Peter said, “Silver and gold I do not have, but what I do have I give you: In the name of Jesus Christ of Nazareth, rise up and walk.” 7 And he took him by the right hand and lifted him up, and immediately his feet and ankle bones received strength. 8 So he, leaping up, stood and walked and entered the temple with them—walking, leaping, and praising God."

Is prayer folly? Can it be? Jesus prayed and taught His disciples to pray also so it can't always be folly. However He rebuked the prayers of the religious who prayed loudly and publicly. Their prayers more a commentary on their own "goodness" than a conversation with God. So we know there is legitimate prayer and false prayer but is there foolish prayer? 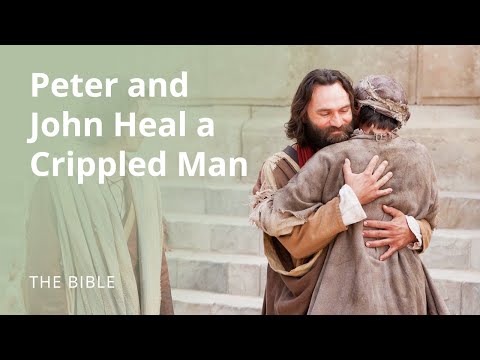 Consider the lame man. Perhaps at one time he hoped to be healed by Jesus but that hope died with Him and now he just prays for money.

Think about it. Prayer is asking. When Jesus taught His disciples how to pray it was a list of requests. It went like this:

"Our Father which art in heaven, hallowed be Thy name, Thy kingdom come, Thy will be done on earth as it is in heaven. Give us this day our daily bread and forgive us our trespasses as we forgive those who trespass against us. Lead us not into temptation but deliver us from evil, for Thine is the kingdom, the power and the glory, forever and ever, amen."

Six requests in one brief prayer. Jesus also said: "Ask. You do not receive because you do not ask."

So we are told, encouraged, urged to ask. There is most definitely no folly in asking. So where is the folly? Is there any? Much ink has been spilled concerning prayer. Conferences have been held. Seminars have been taught. Is prayer that complicated? Did the lame man make a mistake by asking for money? Was it a foolish asking?

Now here is the good news. God is good. God is infinitely better than good. He sees past our limited sight. He answers not what we ask for. He answers what we would have asked for if we could see as He sees.

Money? You want some spare change to grab a bite to eat? Then what? You don't need money. You need legs that work so you can earn your own money and be a blessing to others. That is your true need but you didn't ask because... because you didn't think it was possible or you knew it was possible but not for you or you knew it was even possible for you but feared for whatever reasons it wouldn't happen so you protected yourself from disappointment by not asking at all. But by not asking aren't you ensuring disappointment?

What does God do? He answers the unspoken prayer of the lame man's heart. While his lips are asking for money God cuts past the surface and gives him what he didn't think possible.

If you go to Him as you are full of folly and lame He won't leave you like that. Best of all He will do abundantly above all that we ask or even think. "But" you say. "I have asked and gotten nothing." Keep asking even if you aren't asking for the right thing. He hears. He knows. The Story is not over yet.

That wasn't the first day that man sat at the Temple. His ways are not our ways. They are better. That's the best part. That's the good news.
Posted by Pastor Dan at 09:36