Acts Day 75 - A Matter of Life and Death

5:10 Then immediately she fell down at his feet and breathed her last. And the young men came in and found her dead, and carrying her out, buried her by her husband. 11 So great fear came upon all the church and upon all who heard these things. 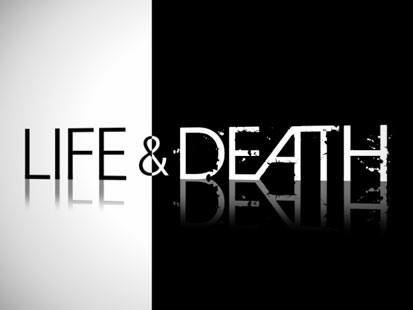 The Greek word for fear certainly has a different element of meaning to it than we have in English. It is a kind of awe. A sense of "WOAH! This is serious!" This event in Acts revealed to the church and those observing the church that this was no ordinary or man-made movement. It was even deeper than supernatural healings. This tragic loss of life as a result of hypocrisy and bold deception was reminiscent of Achan's story in the book of Joshua, a story they would have heard often as children.

It's important to understand that this fear is not one of terror. You can't love Someone you are afraid of. In fact John tells us that perfect love casts out fear (terror) because fear has to do with torment. God has no interest in having us serve Him from a sense of terror or dread. If He was He could just be a full on tyrant and demand subjection. All who stepped out of line would either be severely punished or worse.

However history reveals this is not the case. Instances like this one are very rare. So how come God didn't let this instance go? Why didn't He turn away and let them live out their lying and hypocrisy until old age took them?

It's a valid question.

Adam and Eve were told they would die if they chose to eat from the tree of the knowledge of good and evil. When they first ate from it they felt euphoric. It was awesome! Like the thrill of an affair or of a bank heist the adrenaline from tasting the forbidden was exhilarating. It was just like the serpent said. They didn't die. God was the liar.

Then the feeling of euphoria started to subside. In its place came a feeling of dread, an ominous gloom settled over them. Nature itself began to change. My favourite author intimates that Adam and Eve wept more over the first leaf that fell than we weep over the death of our own children. Death was completely new and horrifying for them. The clock was ticking and the end of their lives was imminent.

We on the other hand are surrounded by death. Dead grass, dead plants, dead trees, dead goldfish, dead family pets and dead family members. Death is our normal. We may not like it but it certainly doesn't alarm us unless the circumstances are truly unexpected.

Outside of our normal there is the Truth. Death is an enemy, the direct byproduct of disconnecting from God, the source of all life. Like unplugging a radio, God is the Source of life and when that breath of life leaves a human body no amount of medical intervention or organ replacements can bring it back.

God desperately wants us to choose life. He wants us to see and understand how serious and real the war between good and evil and death and life are.

Even aside from religion or issues of faith we should see how real this battle is. The United States for years and years now has been spending more on military defense systems to protect themselves from potential evil than it would cost to feed the entire world. The battle between good and evil and the fight to survive on this planet for a mere 70ish years is that serious. Imagine how serious the battle is to God who loves us more than we can imagine and He knows that our eternity is at stake.

Yes He could have let the hypocrisy and dishonesty of Ananias and Sapphira slide but He loved us too much. These new followers of Jesus needed to see firsthand that it was a choice of life and death.