8:26 Now an angel of the Lord spoke to Philip, saying, “Arise and go toward the south along the road which goes down from Jerusalem to Gaza.” This is desert. 27 So he arose and went. And behold, a man of Ethiopia, a eunuch of great authority under Candace the queen of the Ethiopians, who had charge of all her treasury, and had come to Jerusalem to worship, 28 was returning. And sitting in his chariot, he was reading Isaiah the prophet. 29 Then the Spirit said to Philip, “Go near and overtake this chariot.”
30 So Philip ran to him, and heard him reading the prophet Isaiah, and said, “Do you understand what you are reading?”
31 And he said, “How can I, unless someone guides me?” And he asked Philip to come up and sit with him.

How much is one person worth to God? What if that person is a foreigner, an outsider, a Gentile, a eunuch, black even? God takes Philip from preaching to large crowds and baptizing hundreds and maybe thousands and sends him into the desert to find one man. One man who will never have children. One man though considered a foreigner and gentile in so many ways is actually a child of Abraham in the sight of God and perhaps even by birth but that's another story for another day.

The remarkable point to the beginning of this account is how much God values every single person. The disciples were angry and confused when Jesus was gathering large crowds and gaining in popularity on the "good side of the sea" where "God's people" lived and then suddenly packed up and left. Worse still is that He got in their boat and told them to cross to the other side. The "other side" was Decapolis. A cluster of ten foreign towns. Evil unGodly towns. Worse than crossing the tracks. This place was bad. To add insult to injury they landed on a beach next to a cemetery. In the cemetery were two men possessed by demons. It was as bad as the worst they had imagined before they ever left the "good side" of the sea. These men were more like animals than humans. As they came running at them Jesus stood calmly while the rest scattered for safety. When the encounter was over the men were healed and whole and sane. Jesus left hundreds of the "good people" to come to a cemetery to heal the living dead.

How much is one person worth to God? How equal are the "unequal" to God?

When I consider stories like these I can't help but wonder how many people are out there across this globe looking for Him? How many of them are in my town? How many are within walking distance? How many of them present on the outside as so undesirable or far from Him that I would just pass by convinced they would never want Him?

Do you see now why having His Spirit is so critical? The same Philip who ran from the guy in the cemetery ran to this dark skinned foreigner. Philip ran away was he was running on empty. He ran towards when he was filled.

Do you see? We don't need to fight racism and prejudice and inequality. We need to be filled. We need His eyes and His heart. We continue to battle externals not realizing we are running on empty. 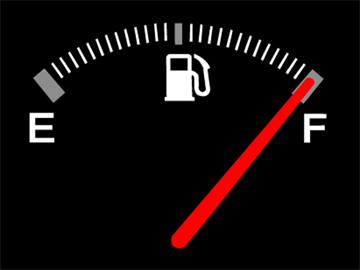 I can't help but wonder if the story would have been different if someone had listened to the call of God and reached Omar Mateen before last weekend. Maybe nothing would have changed. Whatever his particular case may have been I know I need to stop running on empty.
Posted by Pastor Dan at 13:45