17:1 Now when they had passed through Amphipolis and Apollonia, they came to Thessalonica, where there was a synagogue of the Jews. 2 Then Paul, as his custom was, went in to them, and for three Sabbaths reasoned with them from the Scriptures, 3 explaining and demonstrating that the Christ had to suffer and rise again from the dead, and saying, “This Jesus whom I preach to you is the Christ.” 4 And some of them were persuaded; and a great multitude of the devout Greeks, and not a few of the leading women, joined Paul and Silas.

Have you ever struggled with communication? Part of the problem is that communication is done primarily with words and words can be tricky. It becomes even more tricky when you travel or when a significant amount of time has elapsed between when a word was originally used and when you read it.

Let me give some examples. When I traveled from eastern Canada to western Canada some words changed. My cousin asked me to pick him up a jerry can and I didn't even know what he was talking about. We were driving one day and his wife exclaimed "That's a nice unit!" and again I was lost. A jerry can I learned was a gas can. A unit was a car. The only units I knew about growing up were sections in a text book and none of my classmates ever exclaimed "That's a nice unit!" :)

The passage of time can change words too. Today we use the word 'awesome' to describe something spectacular. A hundred years ago and more they used the word 'awful' to describe something spectacular. We now use that word in a very negative sense. Literally speaking we are wrong. Awful means full of awe. Awesome means some awe so 'Awful' is superior to 'Awesome'.

Today we would never say God is awful but really He is and if you were reading a book written a couple of hundred years ago you might be scratching your head when it referred to God as awful.

Why all the word talk? Because when Paul traveled to Thessalonica with Silas and Timothy (and probably Luke and maybe others) he went to the synagogue to talk to them about the Christ. We use the word Christ as a reference to Jesus and Jesus only but back then and even now properly understood it's a specific word or title. In the Old Testament it says  that God "anointed His servant Cyrus...". Anyone God anointed was a Messiah or Christ because that's what the word means.

The Jews had been expecting a Messiah or Christ. The words are synonymous. Do you remember when Jesus was talking to that Samaritan woman at the well and after discussing religion the woman said to Jesus "When the Messiah (the anointed one) comes he will explain all these things." In response and for the very first time to anyone He says "I am He."

See there is a reason why Paul keeps going to the synagogues. They were expecting a Christ. They were waiting for the anointed one. All Paul was doing was using their sacred texts like Psalms and Isaiah and the writings of Moses to show them that Jesus, the carpenter's son from Nazareth was that anointed one. That a suffering Christ who dies is exactly what the prophets foretold and even though time and tradition changed their expectations the truth was right there in the scrolls. 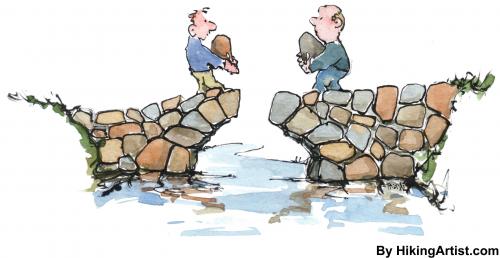 Now what does that have to do with us today? Simple really. If you want to tell someone about Jesus start on their ground. Begin where they are. Take what is familiar to them and then build a bridge to Jesus. That may mean you need to get a Koran. It may mean you need to understand the basics of what your neighbour or co-worker presently believes and then find the links that lead to Jesus.
Posted by Pastor Dan at 21:56