18:12 When Gallio was proconsul of Achaia, the Jews with one accord rose up against Paul and brought him to the judgment seat, 13 saying, “This fellow persuades men to worship God contrary to the law.”


14 And when Paul was about to open his mouth, Gallio said to the Jews, “If it were a matter of wrongdoing or wicked crimes, O Jews, there would be reason why I should bear with you. 15 But if it is a question of words and names and your own law, look to it yourselves; for I do not want to be a judge of such matters.” 16 And he drove them from the judgment seat. 17 Then all the Greeks took Sosthenes, the ruler of the synagogue, and beat him before the judgment seat. But Gallio took no notice of these things.

Messed up. We are messed up.


Let's take a step back and understand the religious/political climate of the time. Rome is politically in charge. They have granted that the Jews can maintain their culture/religion within the empire but matters of law/justice are under the jurisdiction of the Empire. Gallio is Greek but ruling under Roman authority and according to Roman law. Just as Jesus was dragged to Pilate by the Jews, so Paul is being dragged to Gallio by the Jews.
Remember that God has already promised Paul that in Corinth he will be safe from the tactics and punishments he has experienced elsewhere. I wonder what he was thinking about that promise when he was dragged in front of Gallio? I'm sure he was quite shocked when the ruling came down in his favour. Notice what Gallio basically said: "If this man had actually done something wrong I would punish him but if it's just religious theories deal with it yourselves". 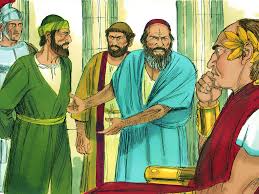 Gallio was a wise man for a moment. He didn't allow religion to cross into the realm of secular justice. Why should it? His business was to maintain law and order. If some people wanted to believe a carpenter from Nazareth was the Jewish Messiah and they weren't hurting anyone by doing so, it was no concern of his.


Now I began by saying we are messed up. Did you notice that Gallio's decision lead to the Greeks beating Sosthenes? Who is that? He was the new synagogue ruler who replaced Crispus after he became a follower of Jesus.


So the Jews wanted Paul beaten only to have their synagogue ruler beaten instead and Gallio did nothing.


Gallio held the power that day and could do or not do as he chose but it turns out he was not so wise after all.


Remember Jesus? The carpenter that could walk on water and raise the dead. He respected the rights and freedoms of everyone including His enemies. Follow Him.
Posted by Pastor Dan at 10:45