21:27 When the seven days were almost over, the Jews from Asia, upon seeing him in the temple, began to stir up all the crowd and laid hands on him, 28 crying out, “Men of Israel, come to our aid! This is the man who preaches to all men everywhere against our people and the Law and this place; and besides he has even brought Greeks into the temple and has defiled this holy place.” 29 For they had previously seen Trophimus the Ephesian in the city with him, and they supposed that Paul had brought him into the temple. 30 Then all the city was provoked, and the people rushed together, and taking hold of Paul they dragged him out of the temple, and immediately the doors were shut.


I began yesterday by stating that I hate criticism but that truth can often seem and feel like criticism. I never fully wrapped up that thought. I opened that way because Acts 21 requires exposing the condition of the believers in Jerusalem then which sheds light on the church today. The goal is not to be critical. The goal is to move us away from the lies that have held us and set us free in Christ.


Paul was a free man. He was born a Pharisee of the Pharisees. From birth he was raised and trained to see the laws as the path to freedom. He was raised to see the Jews as God's favourites. He was raised to believe it was their right as Jews to rule the world. The subjection to the Romans which they experienced daily had nothing to do with the perceived superiority of the Romans. Rather it was humiliation sent by God for a lack of law keeping. Once they got their act together God would once again send them a deliverer like Moses or David and reinstate them to their lofty position.


This was the upbringing of Paul and he believed it all. When Stephen was stoned to death for preaching that Jesus the servant leader who saw no borders and favoured no person above another was the true Deliverer (Messiah) Paul (then Saul) was there. He held the coats of the men who killed him. He and they believed they were doing God a favour.


Paul was confronted by Jesus in a miraculous and unusual way to jar him from his deception. Paul came to see that everything he believed was a house of cards. For centuries Jewish teachers had been carefully crafting a portrait of elitism attainable through the law that was foreign to the Story God had been telling all along. For centuries and millennia they had been offering blood sacrifices as payment to God. At times they became so blind to the truth that they were actually offering their own children as human sacrifices. "The sacrifices that were meant to demonstrate His love were offered instead to appease His wrath." Religion became a system of slavery designed to gain God's approval and force His unwilling hand to open and bless. Gone was the truth that the singular sacrifices were a reminder of the Deliverer first promised in Genesis 3:15 who would come and free them from the lying serpent.


Paul could see it all now. Every custom pointed to Jesus. Every feast was part of that One Story. Jesus was the Lamb slain from the foundation of the world who took away the sins of the whole world. There was nothing to buy. There was no angry God to appease. There was no performance to master.


Paul understood but the believers in Jerusalem did not. They were still stuck in a hodgepodge of Jesus + ______ = salvation. The system of the past they couldn't let go of. They were still in chains. Their prejudices still ran deep. 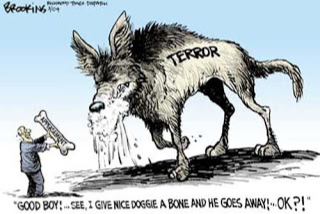 The church leaders saw the storm coming. They tried to avoid it by having Paul appease them through law keeping. Why he agreed to it remains a mystery to me but the outcome was predictable. Only truth brings peace and security. Insecure religionists never have peace and are always dangerous. All it took was a lie from some likeminded believers from Asia and the powder keg blew sky high.


We either have the truth as it is in Jesus or we have trouble.