21:40 When he had given him permission, Paul, standing on the stairs, motioned to the people with his hand; and when there was a great hush, he spoke to them in the Hebrew dialect, saying, 22:1 “Brethren and fathers, hear my defense which I now offer to you.”


2 And when they heard that he was addressing them in the Hebrew dialect, they became even more quiet; and he said,
3 “I am a Jew, born in Tarsus of Cilicia, but brought up in this city, educated under Gamaliel, strictly according to the law of our fathers, being zealous for God just as you all are today. 4 I persecuted this Way to the death, binding and putting both men and women into prisons, 5 as also the high priest and all the Council of the elders can testify. From them I also received letters to the brethren, and started off for Damascus in order to bring even those who were there to Jerusalem as prisoners to be punished.


6 “But it happened that as I was on my way, approaching Damascus about noontime, a very bright light suddenly flashed from heaven all around me, 7 and I fell to the ground and heard a voice saying to me, ‘Saul, Saul, why are you persecuting Me?’ 8 And I answered, ‘Who are You, Lord?’ And He said to me, ‘I am Jesus the Nazarene, whom you are persecuting.’ 9 And those who were with me saw the light, to be sure, but did not understand the voice of the One who was speaking to me. 10 And I said, ‘What shall I do, Lord?’ And the Lord said to me, ‘Get up and go on into Damascus, and there you will be told of all that has been appointed for you to do.’ 11 But since I could not see because of the brightness of that light, I was led by the hand by those who were with me and came into Damascus.
12 “A certain Ananias, a man who was devout by the standard of the Law, and well spoken of by all the Jews who lived there, 13 came to me, and standing near said to me, ‘Brother Saul, receive your sight!’ And at that very time I looked up at him. 14 And he said, ‘The God of our fathers has appointed you to know His will and to see the Righteous One and to hear an utterance from His mouth. 15 For you will be a witness for Him to all men of what you have seen and heard. 16 Now why do you delay? Get up and be baptized, and wash away your sins, calling on His name.’


17 “It happened when I returned to Jerusalem and was praying in the temple, that I fell into a trance, 18 and I saw Him saying to me, ‘Make haste, and get out of Jerusalem quickly, because they will not accept your testimony about Me.’ 19 And I said, ‘Lord, they themselves understand that in one synagogue after another I used to imprison and beat those who believed in You. 20 And when the blood of Your witness Stephen was being shed, I also was standing by approving, and watching out for the coats of those who were slaying him.’ 21 And He said to me, ‘Go! For I will send you far away to the Gentiles.’”
22 They listened to him up to this statement, and then they raised their voices and said, “Away with such a fellow from the earth, for he should not be allowed to live!” 23 And as they were crying out and throwing off their cloaks and tossing dust into the air, 24 the commander ordered him to be brought into the barracks, stating that he should be examined by scourging so that he might find out the reason why they were shouting against him that way.


They knew so little about Paul that it surprised them that he spoke Hebrew even though he was as educated or more educated in all things Jewish than every person present...


It was important to have the whole uninterrupted story today. Had I chopped it up into smaller segments it would have made today's point hard to see.


Do you remember Stephen, the Christian deacon that was stoned to death while Saul(Paul) stood by holding the coats of the murderers? Do you remember why they stoned him?


Stephen had the same accusations leveled against him that Paul is facing now - the accusation that they were speaking against Jewish law and essentially undermining the very fabric of their religion.


Stephen spoke to the accusations. He began with Abraham, the historical father figure of Israel. He went down through Jewish history. He showed how at every point in their history God had faithful men proclaiming the truth and how each of them in every successive generation was largely rejected by the people. The crowd listened. The chief priests listened. His accusers listened. They listened right up to this point:


7:51 “You men who are stiff-necked and uncircumcised in heart and ears are always resisting the Holy Spirit; you are doing just as your fathers did. 52 Which one of the prophets did your fathers not persecute? They killed those who had previously announced the coming of the Righteous One, whose betrayers and murderers you have now become; 53 you who received the law as ordained by angels, and yet did not keep it.”


They could tolerate the history lesson. They were ok absorbing the sins of their ancestors but when the spotlight turned on them and exposed them they went crazy. Luke says they became like animals and blocked their ears and screamed, rushing at Stephen with stones.


Saul/Paul did not know it then but he was watching his own future. The pattern is always the same. We can handle truth as long as it stays away from us. We can study history and see their mistakes but we refuse to have that spotlight shine on us and our present actions.


The crowd listened to Paul until the light shone on them. When Paul told them that it was God who told him to flee Jerusalem years earlier because they would not accept the truth about Jesus they turned on him. All listening and thinking came to a grinding halt.


Do you remember Jesus first sermon in the synagogue in Nazareth after He had begun His public ministry? You can read about it in Luke 4. He read from Isaiah and everyone thought it was wonderful until He applied the reading to them and they went from gushing to gnashing their teeth and literally tried to kill Him.


Let's not kid ourselves. We are not different. I am not different. Turn the spotlight on my prejudices and blind spots and do I remain gracious or do I become otherwise? Sure my cultural background may prevent me from picking up stones but do my ears stay open or do they immediately close? Do I keep thinking about what is being said or do I shut down?

In the wake of the big election this week there are plenty of reports of friendships ended. Lots of yelling but little listening. Lots of demands to be heard and understood but few seeking to understand those they don't agree with. 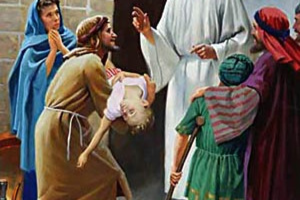 We are not different than our ancestors. We tolerate those who agree with us and turn on the rest and it's getting worse. Jesus said it would. He said even within His followers we would turn on each other and hate each other and the love of most of us would grow cold (Matt. 24). It's happening. And it's happening precisely because we are not following Jesus. We are not sitting at the well with an open sinner from another religion and talking things out with care and compassion. We are not travelling to places where they think entirely differently than we do and extending a helping hand. We are talking in ways that build walls, not bridges, and it is happening on both all sides. We scream to be heard but refuse to listen. We demand equality for our perspective while ripping equality away from others. Jesus was a friend of the underdog. Jesus defended the cause of the widow, the sick, the marginalized, the foreigner. Jesus called together 12 men who were as different as night is from day. They fought. They argued. They even argued with Jesus. However by bringing them together, living and eating and travelling together they began to see that the same blood flowed through all their veins. They began to see that what united them was greater than what they thought would always divide them. Jesus was not a teacher of uniformity. When He designed the world He did not make all the flowers the same. He described His church not as a factory pumping out exact copies of the same thing, but rather a body, where each part is radically different with a different form and function yet fed by the same Source and integral to the success of the whole.

If we don't stick with Jesus we will destroy each other and ourselves.

This statement came across my news feed yesterday and made me catch my breath:

Let's keep listening even when every fibre of our being wants to block our ears and launch a counter attack...
Posted by Pastor Dan at 12:41