24:26 At the same time too, he was hoping that money would be given him by Paul; therefore he also used to send for him quite often and converse with him. 27 But after two years had passed, Felix was succeeded by Porcius Festus, and wishing to do the Jews a favor, Felix left Paul imprisoned. 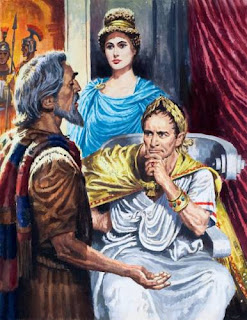 
The way Felix chose to treat Paul had nothing to do with Paul. The way Satan attacked Job had nothing to do with Job. In both cases the motivation that lead to their unjust treatment was unrelated to them. In Paul's case Felix was a greedy man. He was greedy for money, power, and success. Paul was handed to him by Lysias (the commander who rescued him from the Jews). Once he had him he realized he was innocent but the opportunity to exploit the situation for his own gain was too tempting.


Job was a man who loved God supremely. His life was a testimony to the fact Satan did not have complete control of humanity. Satan's accusation before God and the watching universe was that Job was actually like Felix. Job was an opportunist. He saw in God a chance to fake loyalty in exchange for His favour. That was Satan's charge.


Some feel God left Job out to dry. That He should have done more to protect him. What they fail to realize is that the accusation once made had to be addressed. If true than the earth and all of humanity really were loyal to Satan and God would have no legal/moral right to interfere in the affairs of men any more. It had to be seen if Job was a lover of God or an exploiter.


Job knew nothing of this. Did Paul know the real reasons Felix continued to hold him for two years before passing him off to Festus? I'm sure he suspected. Either way the result was the same. He was innocent yet held by an unjust ruler simply because he held the power.


What is the lesson in all this?


First of all life isn't fair. Don't drive yourself nuts expecting it to be.


Secondly be thankful life isn't fair. The wages of sin is death. If God handed out justice without mercy we would all be dead.


Thirdly allegiance to God will be costly in this life. Jesus said "They will hate you because they first hated Me." Satan is a relentless tyrant who obsessively hates Jesus and when anyone aligns themselves with Jesus they become a target. We currently live in a culture where Satan is a myth to most and faith in God is on the decline. For this reason Satan is fairly quiet but his strategy is working marvelously. He has us distracted and living as if earth is heaven and our 70 years here are all there is. Why disrupt us? However try and get serious about living for Jesus and see if you face any resistance. Make no mistake, this world is a war zone on a cosmic level that we barely understand.


Lastly, look at how conflicted Felix was. He believed enough to be frightened by Paul's talk of righteousness, self-control, and the coming judgment yet he behaved to selfishly toward Paul. That inner conflict, the contradictory behaviour, all of it points to the fact that the war raging in the cosmos was also raging inside him. Every man and woman faces the same conflict. Each of us must choose.


Job and Paul both demonstrated that their love for God was genuine and came before every other consideration. I don't know what you will choose but I choose Jesus. I choose love. Love Wins.
Posted by Pastor Dan at 22:36