25:1 "Festus then, having arrived in the province, three days later went up to Jerusalem from Caesarea. 2 And the chief priests and the leading men of the Jews brought charges against Paul, and they were urging him, 3 requesting a concession against Paul, that he might have him brought to Jerusalem (at the same time, setting an ambush to kill him on the way)."


I must confess that this kind of dedicated determination toward hatred is thankfully foreign to me. We can safely guess by the flow of events that the Jews had given up on Felix ever punishing Paul in any meaningful way but they certainly hadn't given up themselves. As soon as Festus took over they were ready to pounce on him. The plan was simple. They wanted Paul to be transferred back to Jerusalem so they could kill him on the way. It sounds like the plot of a movie but it's the plans of the leading men of the church, men with wives and children, men who lead the prayers in the synagogues, "men of God".


When and how did the church come to the place where it was like this? Clearly it was before the time of Jesus too, because planning His murder was done repeatedly without it being even unusual. Bribes were paid. Lies were told. Soldiers were bought off. Delegations were sent to flatter and deceive.


Being a leader is tough. It requires wisdom. People will make seemingly innocent requests like the transfer of a prisoner from one city to another but behind the innocent request is something much more sinister.


Today's lesson is both practical and simple. When you are new to a position of leadership, be it babysitting, a substitute teacher, or a CEO, you need to recognize there are those ready to take advantage of your lack of experience. Kids will tell you the wrong bedtime in order to stay up later. However they likley won't say "Mommy said we can stay up until 10." That sounds too suspicious. Instead it will sound more like "Mommy said we need to be in bed by 10. 10:30 at the latest." Students will tell you the teacher postponed the test but it will be accompanied by a story that makes it sound reasonable.


Everywhere we go and every position of leadership we inherit will come with land mines. Someone will have an agenda. Someone will be a tail trying to wag the dog. It won't always be sinister either. They may genuinely believe in their cause but will deceive you in order to achieve "the greater good." 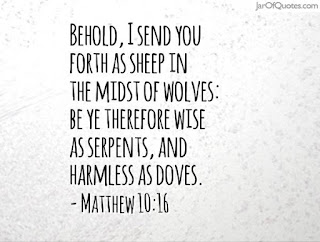 Jesus told us to pray to be wise as serpents but harmless as doves. We need to have the wisdom to recognize evil plots or underhanded schemes but the heart to never employ those schemes ourselves. It's tough. I always want to assume the best about people but unfortunately I can't. Neither can you.


Festus was walking into a trap just like Darius walked into a trap set by his own advisors that landed Daniel in a pit of lions. Tomorrow we'll find out what happened...
Posted by Pastor Dan at 20:39