28:11 After three months we sailed in an Alexandrian ship whose figurehead was the Twin Brothers, which had wintered at the island. 12 And landing at Syracuse, we stayed three days. 13 From there we circled round and reached Rhegium. And after one day the south wind blew; and the next day we came to Puteoli, 14 where we found brethren, and were invited to stay with them seven days. And so we went toward Rome. 15 And from there, when the brethren heard about us, they came to meet us as far as Appii Forum and Three Inns. When Paul saw them, he thanked God and took courage.


At Malta God used Paul to bless the "barbarians" and reveal Himself to them. Paul has been on quite the roller coaster since he left Ephesus to head for Jerusalem. Mostly it's been a lonely one. I can only imagine it was mentally tough and emotionally exhausting too. For those familiar with Paul’s letters you know it has been his dream for a long time to visit Rome. That dream is now coming true and God has an extra special treat on the way - brothers. No, they aren't men from the same mother. Rather they are men with the same Master. Men who have likely also suffered unjustly for the sake of Christ. Men who he can fully be himself with. Men who "get it".


I love that about God. Even in this war zone where Satan wins a lot of battles and we Andre called to endure events and circumstances that are not fun or fair God makes sure we get moments of reprieve, times when we get a taste of Home. After all it is not the streets of gold that will make heaven awesome. It will be the peace of healthy relationships where love reigns. Gone is all tension. Gone is all strife. Gone is everything that divides and opposes.


To kick back with people who get you, who love you for you, who understand even without words, this is joy and rest. 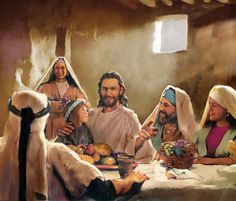 For Jesus that place was the home of Lazarus, Martha, and Mary.