1:30 But of Him you are in Christ Jesus, who became for us wisdom from God—and righteousness and sanctification and redemption— 31 that, as it is written, “He who glories, let him glory in the Lord.” 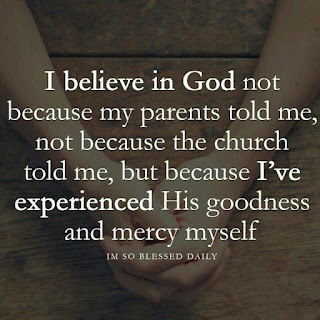 I know I haven't been digging into the direct text from Corinthians 1 for the past couple of days so let's do that now and summarize exactly what Paul has been saying with these two power packed verses.


We are God’s in Christ. When God looks at those who have placed all their confidence in Christ He only sees the matchless beauty and perfection of His son. Jesus became for us wisdom from God. Before Jesus came we had lots of ideas about what God is like but they were way off the mark. Some of those ideas still persist because instead of studying the person of Christ and believing that He is the perfect representation of God we hold onto our own wisdom about God which Paul has been saying is foolishness. This stubborn clinging to our own ideas leads to division and conflict and blinds us to the Truth. Jesus is the Truth. He is our all in all. As Jesus told Philip - if you have seen Me you have seen the Father. These dark ideas we get about God the Father from the Old Testament are a view of God through the eyes of those who had little idea.


Think of Moses and Israel. They come to Mount Sinai. The mountain is "alive" with the presence of God. The people see smoke and lightning and fear for their lives. Moses enters the "fury". While he is gone they make and worship the golden calf. Moses returns and out of anger and despair at their folly he smashes the tablets of stone written on with God’s own finger because he believes they represent a deal between the people and God and the deal has been broken. Fast forward. God tells Moses to bring two new tablets. He is going to write a new set. Moses is blown away. He says "God show me Your glory." Moses has seen miracle after miracle. He has seen the plagues in Egypt. He saw the sea part. He saw the miracles of water and food. They have followed the cloud by day and pillar of fire by night. He was already in the mountain with God for 40 days and my 40 nights. What does he mean by asking to see God’s glory?


Moses is admitting he has little idea what God is actually like. He assumed God was looking to make a deal. He saw God as being like all the other pagan gods but when God said He still wanted a covenant with the people after the golden calf and that He was going to rewrite His Testimony, Moses was in shock. Clearly this God of Abraham was very different than even he thought.


So if God is way better than Moses imagined and Moses before that was willing to go to God in the thundering mountain while everyone else was 'running the other way', what in the world was their perception of Him?


Do you realize that even after the 40 years of wandering in the wilderness and living off of God's miraculous provision the people still never saw God for the indescribably loving God He is? When Joshua took over leadership after Moses died the people affirmed him as their leader but while doing so they repeatedly referred to God as "your God" rather than "our God".


But that is why Jesus came. He is the wisdom of God. If you want the true accurate picture of God watch Jesus. Study His life. See how He interacted with different people and treated them.


Then you will see what real self-sacrificing love is. Then you will understand the sheer foolishness of trying to find some other way of buying your way into God's favour. Jesus is God. He does not want to be bought with our deals and systems. He wants our hearts. He wants us to trust Him like Adam and Eve could have but never did.


He is our everything. If we are going to talk let it be of Him. If we are going to make an argument let it be in His favour. If we are going to contend for anything let it be for the faith of Abraham when he finally realized "The Lord will Provide". There are lots of cunning religious arguments and systems that sound right but there is only one Christ. Know Him better today than yesterday but not as well as tomorrow. :)
Posted by Pastor Dan at 10:45