2:1And I, brethren, when I came to you, did not come with excellence of speech or of wisdom declaring to you the testimony of God. 2 For I determined not to know anything among you except Jesus Christ and Him crucified. 3 I was with you in weakness, in fear, and in much trembling. 4 And my speech and my preaching were not with persuasive words of human wisdom, but in demonstration of the Spirit and of power, 5 that your faith should not be in the wisdom of men but in the power of God.


Paul had come to Corinth from Athens where he had preached on Mars Hill about their statue to an unknown God. Paul left Athens feeling as though he had failed. He felt he had made a mistake. Athens was a hotbed of philosophers who gloried in their own wisdom. When they heard Paul's new ideas they I voted him to speak in the Areopagus as a curiosity - some new ideas to hear and discuss. Paul felt like he got sucked into their world and tried to communicate using wisdom, logic, and fancy arguments when he should have stuck to the simple gospel story. 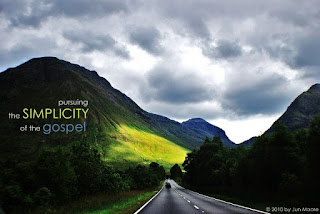 It was for this reason that he shifted gears in Corinth and vowed he would preach Christ crucified and risen without any attempts to fancy it up with human wisdom and reasoning. He was now convinced that following Jesus was a matter of conviction, not a matter of convincing. Later on when he trained Timothy for the work of ministry he told him to avoid arguments and quarrels. No one has been or ever will be argued into a relationship. It is just another form of self-obsession and self-worship to think we can manipulate someone else to see things as we see them. All this seems wise to men but God knows it is foolishness. The change we need is a change in the heart and the simple gospel story is enough. If the love of God revealed in Jesus is not enough nothing else will do more.


Consider this reality from the pen of someone else:


"It was this that proved the ruin of the Jews, and it will prove the ruin of many souls in our own day. Thousands are making the same mistake as did the Pharisees whom Christ reproved at Matthew's feast. Rather than give up some cherished idea, or discard some idol of opinion, many refuse the truth which comes down from the Father of light. They trust in self, and depend upon their own wisdom, and do not realize their spiritual poverty. They insist on being saved in some way by which they may perform some important work. When they see that there is no way of weaving self into the work, they reject the salvation provided.


A legal religion can never lead souls to Christ; for it is a loveless, Christless religion. Fasting or prayer that is actuated by a self-justifying spirit is an abomination in the sight of God. The solemn assembly for worship, the round of religious ceremonies, the external humiliation, the imposing sacrifice, proclaim that the doer of these things regards himself as righteous, and as entitled to heaven; but it is all a deception. Our own works can never purchase salvation."


I can't tell you how sad and frustrating it is for me to hear and see people looking for some complicated way to God. They are willing to dress weird, to manipulate one or two verses into some "new truth" that no one else has. They are willing to alienate family and friends. They are willing to argue for hours, "study" for weeks and months and even years. All of it designed to find some secret, some missing ingredient, some "new light". All because they are in love with themselves and their ideas yet refuse to trust the love of God lived out in Jesus. A love that needs no complicated systems or elaborate schemes or wild religious gestures. Abraham believed and it was counted as righteousness. The woman at the well believed and was never the same again. Mary believed and left Magdala behind. The thief on the cross believed and without baptism or church membership or meeting any other religious requirement will awaken at the call of Jesus and rise to meet Him in the air.


Many wise and many religious people will hear the sad pained words of Jesus to them "I never knew you..." while many from the "wrong side" of the tracks who were rejected by men and religion and told they could never be "enough" will hear Jesus say "Well done good and faithful servant, come enter the joy of the Lord." Why? Because they believed in Him and gave Him all their nothingness in exchange for His everything.
Posted by Pastor Dan at 12:23