1 Corinthians Day 8 - Think About It

1:17 For Christ did not send me to baptize, but to preach the gospel, not with wisdom of words, lest the cross of Christ should be made of no effect. 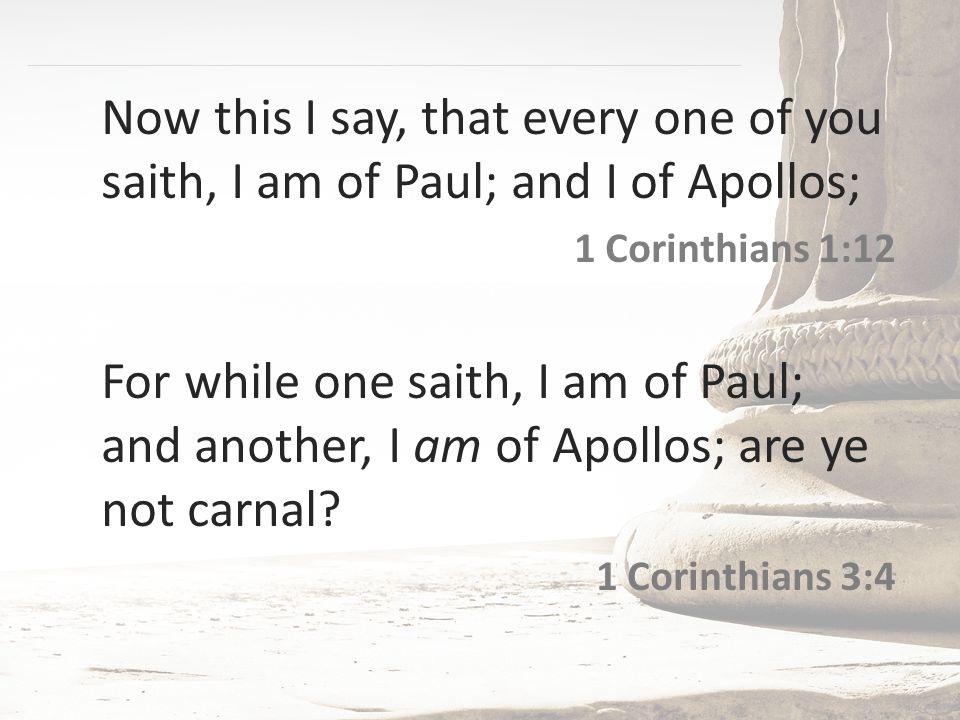 Well specifically we aren't told but the inference is that somehow each of these preachers had a slightly different slant on the message. Whether that is true beyond style and emphasis is debatable but they felt it was. It's more likely that their own desires and personal biases were causing them to imagine differences so they could use the currency of the if names and reputations to add weight to their own points of view. Had these trends grown and blossomed Corinth would have ended up with a similar situation as we have today. Multiple Christian churches with different names and different teachings. Paul could see the end result. People would be baptized into an "ism" Rather than into Christ, making His sacrifice of no effect. The emphasis would shift from the good news of His relentless love to the issues that divide us.


Seems his concerns were rather prophetic. You don't have to hang around any Christian church for long before you discover their preferred teaching. It might be speaking in tongues. It might be the day of worship. It might be a certain dress code. It's not even about whether those issues are true or not. Satan wins just by getting us to place greater importance on them than should be. Contentions arise. quarreling follows and the end result is that Christ is lost sight of.


Yesterday we talked about Abraham and his polygamy. I was challenged privately and I was expecting it. The challenge was that I was making it sound like God didn't care that Abraham was polygamous and that essentially sin doesn't matter so long as we believe. I can see the concern. However the issue is not whether sin is bad or not. Of course it is. Look at the pain and trouble caused by Hagar entering the marriage of Abraham and Sarah. The truth is that the turmoil in the Middle East that persists even to this day can be traced back to that one bad decision.


The problem is that focusing on our sins doesn't cure sin. Abraham didn't have a child with Hagar because he was a terrible awful person. He did it because his belief wavered. His confidence that God could keep His promise faltered. Unbelief produced the sin just as unbelief caused Adam and Eve to eat from the tree. If unbelief is the true root of sin, than belief is the only antidote.


That's why God didn't tackle the sin issues in Abraham's life. He went straight for the cause. He knew if He could win Abraham's heart and gain his full confidence the rest would follow.


One person explained it like this. The sins in our lives are like leaves on a tree. Plucking them off solves nothing. They will just grow back. If you really want to get rid of the leaves you gave to rip the plant out by the roots. The roots are where the growth begins.


Belief or unbelief. Not belief that there is a God. Satan believes that. Belief in Him. Confidence in Him. Trust in Him. If our confidence is in our wisdom about God, our brand of religion, our favourite Bible teacher or in anything but Christ alone than the cross of Christ is made of no effect. We are, in essence, worshiping a golden calf. We are worshipping ourselves and the idol of our own opinions and we will always end up fighting with someone while Christ, the One who died for us, is left out in the cold.
Posted by Pastor Dan at 08:54