9:1 Am I not free? Am I not an apostle? Have I not seen Jesus our Lord? Are you not my work in the Lord? 2 If to others I am not an apostle, at least I am to you; for you are the seal of my apostleship in the Lord. 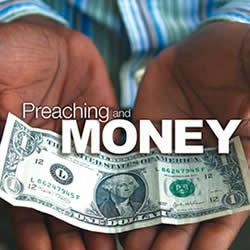 Several years ago a visitor came to one of my churches and wanted to speak with me after. I had never met him before and never saw him again. My theory is that he had a lot of ground to cover with his free wisdom to share. Of the many topics he addressed the one he was most passionate about was preachers and money. He firmly believed no one should receive money for preaching the gospel. Ironically he asked for money when his preaching was over. :)


His basic point was that Jesus didn't get paid, grace is free, and no one should be profiting from it.


I will concede that if you only look at it from that angle a case could be made. However there are other angles.


First let's dispel the myth that Jesus did not receive money. We know He did because Judas was in charge of it.


Secondly grace is not free. Follow the dusty footsteps of Jesus from Bethlehem to Egypt to Nazareth to the world and finally to the cross and tell me grace is free. When I was growing up my dad repeatedly said "Nothing is free in this world." He was only partially right. Nothing is free anywhere. When I receive a gift it is free for me but not free for the giver. Grace is free for us, but it cost a price I don't think we'll ever fully comprehend. The "utopian" idea that we can escape the topic of money and cost in the realm of the gospel is foolishness based either in sincere naivete or willful ignorance.


It seems this topic was hotly contested in Corinth and it's not hard to tell why. Remember there was a war over who was the best pastor/teacher. Some preferred Paul, others Apollos etc... Paul was by his own description a foundation builder. He would come into a place like Corinth or Athens or Philippi where there was little or no knowledge of Jesus and he would lay the foundation. Because there was no church body, no established group of believers it was impossible to expect payment. He may find a home to stay in and meals provided by a willing family which is already significant payment and he would subsidize his income by making and selling tents. He was what we call today a bivocational pastor. Part time in ministry and part time earning a living some other way. To get new work started this is necessary unless you have the support of a mission minded church or churches sending you financial support.


We have to remember money is a tool and money is not evil. It is the love of money that is the root of all kinds of evil.


So with that background information it's easy to see what happened in Corinth. Once the church got established Paul moved on and Apollos came. The church either decided to pay him or at least approached the subject and the controversy started. Paul never took money from us for preaching and teaching so why should he get paid?!


Who better to comment on this than the guy who worked for free(ish)?


So Paul lays it out. A worker is worth his hire no matter the work. Simple. End of story. I imagine it was uncomfortable for some folks as this letter was read in church, especially those who used Paul to justify their position.


It does need to be said that there are some preachers who take way too much money to themselves. As the Bible says: By their fruits you will know them... Abuse of what is good and right does not change the fact it is good and right. Money is a tool and we should all be using whatever resources God has gifted to us to advance His kingdom of self-sacrificing love. :)
Posted by Pastor Dan at 10:53