10:14 Therefore, my beloved, flee from idolatry. 15 I speak as to wise men; judge for yourselves what I say. 16 The cup of blessing which we bless, is it not the communion of the blood of Christ? The bread which we break, is it not the communion of the body of Christ? 17 For we, though many, are one bread and one body; for we all partake of that one bread.

Don't forget how this letter started and why it was written. The church in Corinth was fracturing. Instead of being one body heading one direction they were splintering. It's likely the most common problem that plagues churches. Why? Because we are happy to have Jesus as our Saviour but refuse to allow Him to be our Lord.

We just had a guest speaker come here over the past few days and his central focus was the good news and God's desire to have a relationship with us. He dug into the covenant symbolism of the Old Testament showing that God is committed to us and will do everything He has promised to do even if we do nothing. Jesus did not come to earth because we held up our end of a covenant. He came and died while we were yet sinners. He is coming back too and He will come whether or not we hold up our end of the covenant. He will come because He promised. End of story.

When the series was over I asked a young man (17) who came every night what he would remember most from all that he heard. He said it was the realization of the vast difference between making Jesus our Saviour and making Him our Lord.

Paul masterfully makes this distinction to the Corinthians without even pointing it out in those terms. He refers back to the Israelites who were happy to have God free them from their taskmasters but once free they wanted to call the shots. They were unwilling to submit to God as their Lord. 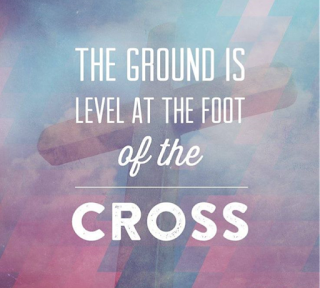 Then he points to the cup and the bread. The two most powerful symbols in Christianity. The temple is a memory. It was the model pointing to the cross but now that the Lamb has come and died once for all the cup and the bread are the new symbols. Notice what Paul does with them. He levels the ground. What do I mean? For a church body to split and fracture pride must take first place. One group becomes convinced they are wiser/better etc... than the rest and start trying to be Lord in place of Jesus. In response other groups gel to form a resistance. Pride deepens. Lines are drawn. Walls go up.

Paul's response is beautiful. We all drink from the one cup. We all eat from the same loaf. Were it not for Jesus there would be no church. Were it not for God Israel would have remained in Egypt in slavery. If we needed God to get this far, and if we were all equally helpless and hopeless why are we acting as if we rule the kingdom now?

Paul brought humility and perspective to a church that was happy to have Jesus save them but desired in their new found freedom to be king of the hill.

How about us? Is Jesus our Saviour and Lord or are we trying to be King in His place?
Posted by Pastor Dan at 19:04