5:12 For we do not commend ourselves again to you, but give you opportunity to boast on our behalf, that you may have an answer for those who boast in appearance and not in heart. 13 For if we are beside ourselves, it is for God; or if we are of sound mind, it is for you. 14 For the love of Christ compels us, because we judge thus: that if One died for all, then all died; 15 and He died for all, that those who live should live no longer for themselves, but for Him who died for them and rose again. 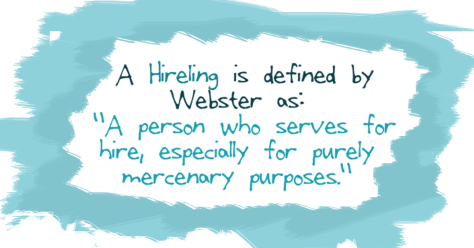 Jesus told a parable about shepherds who are hired help. He said they are just working for pay. They don't care about the sheep. When danger comes these shepherds run away and abandon the sheep because they are only there for themselves to begin with. On a warm sunny day when all is well you can't easily tell by observation which shepherds love the sheep and which are there just to get paid. However when the storms come or the predators circle the flock it becomes obvious very quickly what kind of shepherd they are.


The key though is not how great Paul is but how he can to be this way. He found the One. The One who laid aside His kingdom and crown, His divinity and majesty to come to this dark broken and hurting planet. He became one of us, and as if that wasn't enough He became a servant to all of us. His days were spent for suffering humanity. His nights were often spent in prayer for the strength of character to keep going in the face of violent relentless opposition. The very ones who should have been His greatest support were instead His most fierce detractors. In spite of all this He kept going. From the temple in the heart of Jerusalem to the far reaches of Tyre and Decapolis Jesus was a tirelessly unstoppable force. He had sheep to feed, lambs to train, wounds to bind, and a message to bring from His Father. In the end He died. He didn't have to. He chose to. He could have called ten thousand angels to His rescue but He never called one. Satan's claim was that He couldn't be merciful to us and remain just. It seemed a rock solid argument until the Rock of Ages stepped down into our mess and took the punishment so we could receive His mercy.


Paul found Him or more accurately He found Saul and transformed him into Paul. For Paul it was simple. "Jesus paid it all. All to Him I owe. My sins had left a crimson stain and He washed it white as snow." So Paul laid down the whip of the predator and became the prey. How could he do less?


If you are going to follow any one, make sure it's Someone who would rather die than quit on you. Love never fails.
Posted by Pastor Dan at 22:57